I recently spoke to a friend about playing Final-Fantasy-7 (a playstation 1 game) and not getting into it. Even though I had installed the emulator on my hacked xbox and ported my save game over from my hacked ps2. So I could play on the TV with a controller. While that was fun, the game itself wasn’t. All 3D final fantasy are garbage. I do play the old FFs (1-6 translations are great) on emulators on my computer sometimes (NES and SNES). It was fun back in high-school. However recently I find it hard to enjoy games. Perhaps I’ve played too much with my brothers and I need to get out there and play crazy addictive online games. I doubt it though. Today, however my brother discovered my store of old computer games. I was like, “hey, remember rags to riches?

I have that.” We then proceeded to crack up because this game is hilariously hard, and yet fun to play because of it.

Here’s the link to a true to form review of rags-to-riches.c64, talk about keeping a brother down. He’s playing it now and is ducking in doors like a mad man so he can attend college one day.

So in general: emulators rule, because they allow me to go back and play games that I enjoy for a different reason than today’s games. While I won’t pay for an old execution, I’d pay for an old game idea. Old games are still more fun than new games. This is probably due to some sort of perceived limitation of old computers. Where as these days I’m usually disappointed in all the boring fps killing game ideas, and laugh more at their sad belief of what a good idea is. Those games are only fun when I play co-op versus the swarming computer AI. (hence why Halo’s swarm characters fit so well, and yet story sucks so bad). Really though, I more enjoy the idea of relaxing and joking during a video-game than the game itself. Most console games seem to be staying course in the one-player direction, except for those crazy expensive rhythm games (that have crap music). 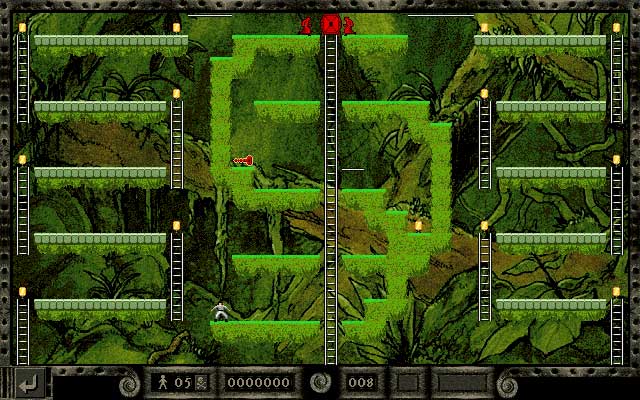 Another good old game is lode runner by sierra and presage, the sounds were awesome and an updated version I never knew about has multi-player over the net. I should totally hook up and play with a new friend. But, lode-runner is most likely more fun when you are fighting over the keyboard space with your brother. The action is great when you are almost cornered and then you think fast, Or if 2p somehow arrives to save the day.

Emulation technology is also interesting when you get into virtual machines like parallels and modularity that comes from sparse kernels with lots of modules allowing for user-space lock down like hypervisor on the xbox360 or not crashing like the real-time OS QNX. Unfortunately this means I can’t play all the old ported games on a 360, which is one reason I’ve yet to get one. Another reason is that Microsoft is trying to unify gaming (windows4games/live) and so they kinda force companies to release on computer too, except Halo 3 isn’t on computer so I don’t get it. Oh and The RROD was a good reason to wait. I like computers more even though it’s configuring hell for people. Because in actual fact games aren’t that great, so I kind of enjoy the learning involved with curiosity, configuring and tinkering, especially when related to networking.